Nicola Sturgeon announced the National Survey below, on 02/09/16.

SNP Statement: “Nicola Sturgeon launched the first phase in our new independence initiative – the biggest listening exercise in our party’s history, which will reach out to 2 million people in Scotland before St Andrew’s Day.

Members of the public can take part in The National Survey to give their views on Europe, Brexit, and independence, and set out concerns and questions they have.”
Source: http://www.snp.org/nicola_sturgeon_s_speech_getting_on_with_the_job 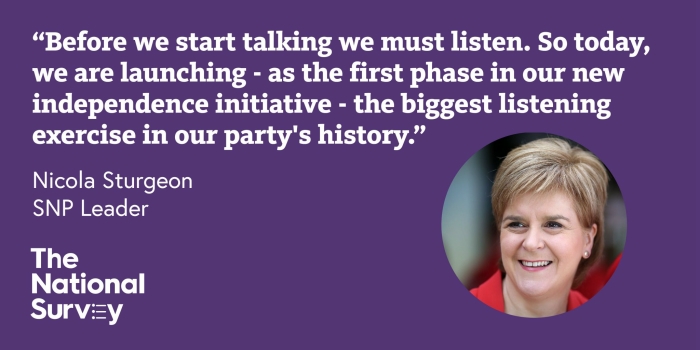 Take part in the biggest ever political survey about Scotland’s Future www.survey2016.scot

Take part in the biggest ever political survey about Scotland’s Future https://t.co/Vojz45Ta0R pic.twitter.com/i6tpE48UYm